My research looks at ways we can monitor surface disturbances due to permafrost degradation via differential interferometry with satellite synthetic aperture radar (SAR) ‘images’. I’m also interested in how well different bio- and geo-physical variables such as ground ice content and soil moisture may predict an area’s susceptibility to future disturbances, with the aim of developing a ‘susceptibility raster’ for our study site at CBAWO. Emphasis will be placed on describing surface roughness on a number of different scales, with the satellite imagery, drone imagery and pin profilometer measurements capturing the large, medium and small scales respectively. 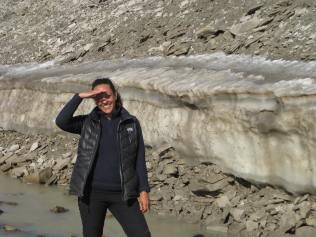 Vegetation indices, collected using remote sensing, can be utilized as proxies for modelling green gross ecosystem productivity (GEP), and therefore can be used to estimate net ecosystem exchange (NEE) of CO2. My research will examine the relationship between the seasonal variability of NEE and the normalized difference vegetation index (NDVI) for a mesic vegetation site at the CBAWO. The seasonal NEE of CO2 will be derived using the eddy covariance method based on data collected by sensors deployed on a flux tower. Meanwhile, multi-spatial resolution NDVI data will be collected throughout the growing season (i.e. emergence, growth, maturity, senescence) for the tower footprint. By determining the relationship between seasonal NEE of CO2 and NDVI, it will be possible to upscale seasonal NEE using satellite NDVI data and examine tundra vegetation response to climate warming over time.

My research examines the spatial and temporal dynamics of seeps around Cape Bounty, as well as their response to rainfall events. I seek to find their water sources and understand the mechanisms that allow for their constant flow in the summer. Seepage at Cape Bounty has only become widespread in the past decade or so, and its influence on Arctic landscape may prove to be significant as the water erodes the active layer and redistributes sediment and nutrients.

Permafrost is a vital factor contributing to hydrological processes in Arctic landscapes and aquatic ecosystems. Climate change associated permafrost melt influences many characteristics of the hydrological cycle, including; increased volumes of subsurface water flow, as well as increased turbidity of these subsurface pathways. These events have lead to alterations of water quality parameters, including turbidity, in the West Lake of CBAWO. The aim of this study is to assess the influence of turbidity on aquatic ecosystem health and water quality by measuring zooplankton species composition, functional diversity, and primary production across an artificial turbidity gradient. Understanding the influence of turbidity on zooplankton species composition and diversity will allow us to determine changes at higher trophic positions and ultimately at the ecosystem level.

My research focuses on how microbial community structures are affected by increased temperatures and enhanced snow deposition in the High Arctic. I will work with the experimental warming sites with and without manipulated snow covers at the ITEX sites in CBAWO in order to understand how the microbial communities are going to react to the warming Arctic. I am further interested to investigate the implications of these changes for the tundra vegetation.

I am a first year M.Sc. candidate and I will be using hand-held hyperspectral remote sensing data to attempt to quantify foliar nitrogen concentration. I will then see if this information can be used to predict gross primary production (GPP) for vegetation types at the Cape Bounty Arctic Watershed Observatory (CBAWO). Accurately estimating foliar nitrogen can help us predict how Arctic environments will respond to increases in temperatures at high latitudes from climate changes. It is anticipated that increases in temperature could lead to increased levels of usable nitrogen for plants, enhancing photosynthetic rate and carbon removal from the atmosphere. I will be capture foliar nitrogen values from plots receiving greater snowfall and elevated temperatures, and compare this to plots receiving neither treatment. My research will improve our understanding of feedback between the land and atmosphere in the high Arctic in order to help predict how these environments will respond in the future.